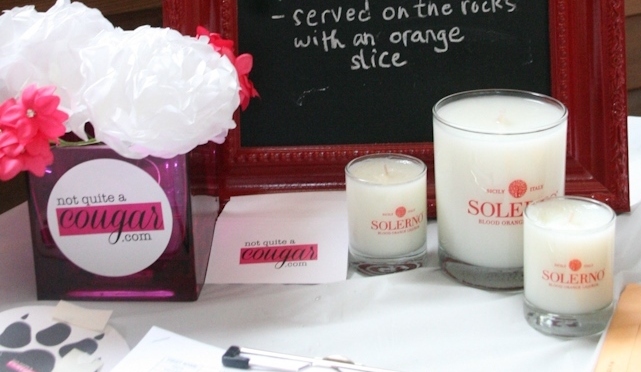 Thalia and Sean laughed lightly together as they hung the NQAC banner on the back wall of the Overlook second-floor patio for our One Year Anniversary Party. Sean was balanced on a chair and Thalia was unspooling wire to him as he fastened it around the nails they’d pounded into the wood.

Marlie and Bea chatted amiably at one of the tables. Marlie was folding the table-tents that Thalia had created which displayed our specialty drinks and announced our prizes. The graphics looked so professional and perfect, it made me shake my head in bewilderment. Bea was unfolding the white paper flowers which were to be placed in the pink cubed vases that would then be set out on the ten or so tables that scattered the space.

Jack and his team from Solerno and Lillet were calmly setting up the the two reception tables. White table cloths floated in the breeze and they weighed them down with their cute tote bags, which were to be gifts for all our guests. They then set up a red-framed chalkboard on which one of the girls carefully wrote out the drink specials.

The mood was serene yet festive, and filled with measured anticipation.

Clearly, no one but me could see the obvious:

WE WERE IN CRISIS MODE.

It was 5:01pm, the party was to begin in 29 minutes and we were nowhere near being ready. The sign-in sheets still needed to be put out. The microphone wasn’t set up. The posters were still rolled up in a corner. And worst of all, there was construction going on in the lot next door and there were plumes of dust swirling around us, with a constant stream of grinding, shattering sounds that made me feel like my head was going to explode.

I marched over to one of the cocktail waitresses. “WHEN IS THIS NOISE GOING TO STOP?” I demanded. She looked at her watch lackadaisically. “Any minute now.” She kindly did not scowl at me, as I’d asked her this five times already.

I then marched over to Thalia and pointed at the pile of table-tents in front of Marlie.  My voice was on the brink of hysteria. “SHOULD I PUT THOSE AROUND THE BAR DOWNSTAIRS?”

Thalia looked me over carefully. Me with my wild eyes, a thin sheen of sweat across my forehead from the heat of the afternoon and also my nerves. I was wearing a bright red baking apron tied around my white and pink dress. I’d brought it to the bar so I wouldn’t get dirty as we set up. This had been a good call as I already had a thick swipe of construction dust across my left hip. I was wearing my mangy old flip-flops as I was afraid I’d fall in my new heels, so was putting them off as long as possible. “Hmm,” she said diplomatically. “Why don’t we have Marlie do that?”

I looked over at Marlie in her skinny jeans and stylish stilettos, looking fresh and unfazed by the clear chaos around her. “GOOD IDEA,” I said, nodding vigorously. “WHAT SHOULD I DO?”

“Why don’t you go stand over there and drink some water?” Thalia suggested and pointed to an out of the way table. “You’ll want to stay hydrated for tonight.”

“OKAY,” I said and did as I was told. After a few swigs of water and deep breaths, I’d calmed down a bit and decided to go freshen up my make-up. I’d gone to MAC for a lesson the Tuesday before the party, as Lux had instructed, but as my sweet salesguy, Steven, watched my unsteady hand try to replicate his perfect cat-eye, he’d said to me, “Why don’t you come back before the party and I’ll just do this for you.” I’d smiled at him gratefully. So now, my make up was perfect.

And when I emerged from the bathroom, I saw that everything else was now perfect too. Floyd, our emcee for the night, had arrived in his Swedish Fish shirt, (“It’s pink, see? Just like the logo,” he’d said) and this had kind of made me want to hug him. He was busy working with the manager to set up the sound system. The flowers and table-tents were set out, the construction site had quit for the day, the posters were up and the candles on each table were blazing cheerfully. We were ready.

I realize now, I am probably not the best person to write about this party. I get scatterbrained when I am nervous, under the best of circumstances. But I also was struggling with a lack of sleep that evening because, as I mentioned, I’d had some trouble pulling together August 9th, 2013, Part Two the night before. And then I’d gotten weepy and distracted from my writing when I’d seen that all my friends were Instagramming pictures of the pink pedicures they’d gotten just for the occasion. As a result, I’d gotten to bed too late.

So by the time people started to arrive, taking their raffle tickets and holding out their arms for the pink wristbands which would entitle them to the one hour open-bar of specialty drinks, I was sort of in a sleep-deprived frenzy. I was supposed to do a reading of the day’s post but when the music lowered and Floyd introduced himself and then introduced me, I realized I couldn’t do it. There are many reasons why I am no longer an actress, and one of them is that I am now a terrible public speaker. When I’d practiced the reading at home in front of The Cat, it had come out as monotone and boring and inappropriately somber. So instead, I gave an unplanned rambling speech that in no way demonstrated my gratitude to Thalia for setting up such an amazing event, nor to anyone else for their help in the party. I may have not even thanked my Team.

To be honest, I actually have no idea what I said.

I felt I was the most annoying type of hostess, the one who would come up to you and say, “Oh! I’m so happy you’re here! Thank you!” And then I’d see a guest I hadn’t talked to and would say, “I’m so sorry. I just have to say a quick hello to them.” I was flitting around that place like I was Paris Hilton or something. I fretted about this.

But then when I looked over the patio I realized, no one cared.

Because they were all too busy having fun.

My co-workers were there, some old U.C.L.A buddies were there, some co-workers from previous jobs were there, and my NYC friends were there. And their friends, and their friends of friends were there, and they were all filling the patio with introductions and the clinking of glasses and hearty toasts. One of my friends had even driven in from Boston for the occasion. Everyone was mingling and laughing and each time Floyd and I announced a winning ticket for our prizes (a gift certificate for two to Tartina, a photo shoot with Kevin A. Richards, a NQAC Swag Bag and two NQAC t-shirts designed by Sean’s son, Thomas) everyone would raise their drinks and cheer. The winners seemed genuinely thrilled with their gifts.

Sometimes I would find myself slipping off to the corner so I could just watch it all. And I’d think, “Wowwowwow” and try to catch my breath.

As the sun set and the candles blazed brighter and the lights Thalia had looped around the patio became more vivid, people continued to arrive. They would congratulate me, give me a hug me or take my hand, introducing me to their group and talking up the blog to them. I would smile fiercely and say to myself, “Don’t be weird, Tracey. Just take it in.” And eventually, I did just that. I allowed myself to have a really good time.

When I arrived home later that night, I arranged all the flowers and gifts I’d received on my dining table, the thoughtful notes and Solerno candles and NQAC decorations Thalia had created. And I sat there for a long time, staring at the collection, blinking and biting my lip, too tired to actually cry but feeling the emotion tighten my throat and making my heart thump heavily in my chest.

The next day I rolled into the office late and I was exhausted. I tried to keep up with all the congratulations on Facebook and Twitter but I was too busy at work to do it. And I felt bad about that. My co-workers would approach my desk with alcohol-weary eyes and say, “That was a GREAT party, Tracey!” And I’d smile and say, “Thank you.” Even though I knew I couldn’t take any credit for it.

But as the afternoon wore on, I found myself becoming strangely and increasingly agitated. All this time and energy people had put into the blog, and the party, how would I thank them all? And more than that – how would I live up to it all in Year Two? What if I let them down? What if I couldn’t write anymore or lost inspiration? I mean, I didn’t even have any dates set up! (“You’re slacking,” I could hear Lux reprimanding in my head.) I had nothing on the agenda.

OMG I HAVE NOTHING TO WRITE ABOUT.

Clearly, it was over.

I ate some pizza to try to drown this realization.

But at the end of the day, I looked up from my desk and saw Lainie, Emily and Marc assembling the large remote-controlled shark balloon Emily had ordered. Marc filled it with the helium tank he’d brought in. Within 20 minutes, they were swimming it through the office halls, on an intense mission to frighten people at their desks, arguing over who could guide it the most accurately.

And as I watched this scene, I smiled and thought to myself, “We’re going to be okay. With a cast of characters like this, we will be okay.”

One of Thalia’s awesome table-tent designs.

Thank you to all who contributed to this fantastic event: Solerno, Lillet, Kevin A. Richards photography, Tartina & Overlook as well as Thalia, Sean and the many, many other volunteers who put in their time to make the night so fabulous.

And thank you to everyone who came out for the party. It was incredible and I see, even today, I still can’t express how much it all meant to me.