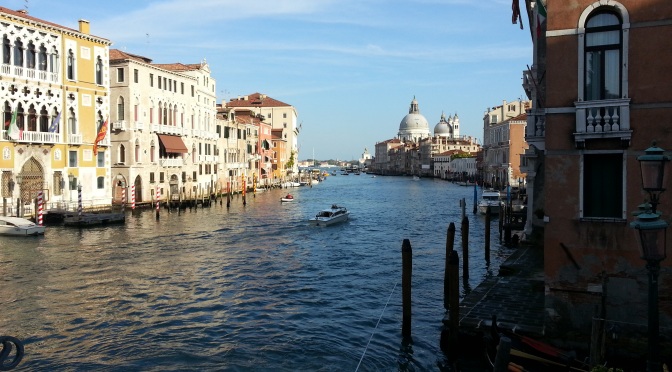 “Ah, Venice,” said Dr. Shay in his slow, measured tone. He moved to retrieve his stethoscope. “Beautiful city.” Dr. Shay is in his early-fifties and has been my doctor for many years. I like him because he never makes me feel rushed in my appointments and lets me spout out my various theories on the roots of health problems without becoming annoyed.

“Yes, I know,” I replied, nodding. “I’ve been there.” That was part of the problem with this whole trip. I was being forced to take vacation time for a location that I’d already been to. It pissed me off.

“You don’t sound too thrilled,” he said as he wrapped a blood pressure cuff around my arm.

“Because it’s a work trip,” I sighed. “I was hired by this L.A. screenwriter to write his screenplay into a novel. I took on the job thinking it would be a fun project because I wasn’t working on anything at the time but it’s turned out to be really stressful. If I’d known how hard it would be, I’m not sure I would have agreed to do it. It’s been two years of intense work. It literally is the Never Ending Story.”

“Oh,” I said. “He’s flying me out there to do research. That’s where the book takes place.”

“I see,” Dr. Shay murmured, as he felt the glands around my throat. “I’m sure it will still be a good trip though.”

“It won’t be,” I said, more forcefully than was appropriate. “He has us on an incredibly rigorous schedule and there’s no downtime. We’re researching together, staying together, eating all our meals together. It’s going to be…a lot.”

“Not to mention, he’s bringing his wife and so basically I’ll be the usual third wheel,” I said. Then I added petulantly, “In one of the most romantic cities in the world.”

“I see, so you need Xanax to deal with him?”

I am the person you don’t want to be sat next to on a plane. I am so terrified of flying I will grab your hand and cry into your shoulder and force you to talk to me while you’re innocently just trying to finish your Sudoku. I was taking a red-eye to Italy and had to start working right after I landed so I really needed to be able to relax and get some sleep. I had no idea how I would accomplish this. Except with maybe some anxiety-reducing medication. Which was giving me anxiety just thinking about having to take it.

“Well,” said Dr. Shay, clearing his throat. “That makes sense.” He then turned me around and placed the stethoscope on my back. “Flying is totally unnatural if you think about it. Breathe in please.” I did. “Human bodies flying through the sky in some sort of airborne bus. There are so many unfortunate outcomes. When we’re younger, we see pilots as omnipotent, we trust them, but as we grow older we can see them as fallible – they are just our peers. We can see them as people just doing their job. And like in any profession, mistakes can be made.”

This was not helping.

“You have a rash on your back, Tracey.” he asked. He then turned me back around. “Come to think of it, why is your face so broken out? I’ve never seen your skin look so bad.”

“Um,” I stammered. “I don’t sleep much. I’m working on this Venice book so…I’m writing a lot and, well…” I trailed off.

“Is that so?” he asked. He moved to his chair, sat down and folded his arms across his chest.

I bit my lip. “I’m also kind of drinking a lot to get through it…”

He raised an eyebrow.

“The thing is,” I said quickly. “I come home from work every day and I’m so tired and then I have this whole other job to do and I just can’t face it. But if I have a few drinks, well, then I can get through it. It makes it fun. Well, not fun but tolerable.”

“How much are you drinking?” he asked.

And I told him.

“That’s too much, Tracey,” he said. “Now look, I understand the need to be some sort of tortured writer Hemingway-type if you will, and that’s fine. If you want to take ten years off your life.”

Hmm. “Yeah, but,” I said and pointed at him. “I don’t drink soda, I quit smoking AND I exercise. Besides the excessive drinking, I live an incredibly healthy lifestyle.” I gave him a wink.

He was nonplussed. “Knock it off, Tracey.”

He began writing out my prescription. “Now, I know you’ve never taken this, so I suggest you do a trial-run with the Xanax before you get on the flight to see how you react. You never know, it could be bad.”

I left his office with the prescription in my hand and a feeling that I was failing on many levels. Not only was I a stereotypical single early-40s Assistant, living in a stereotypical studio with a cat, now I was a stereotypical tormented writer with a drinking problem. Geesh.

But I didn’t have time to dwell on any of this. I had to take a practice Xanax. And then I had to go to Venice.